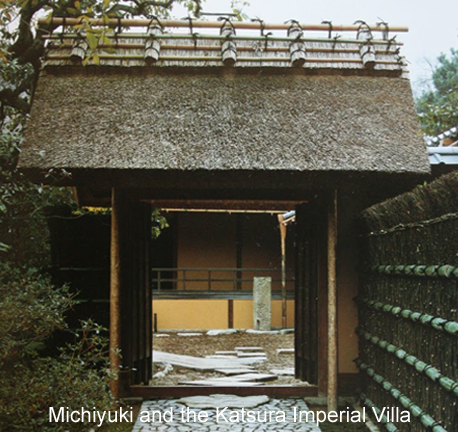 Michiyuki and the Katsura Imperial Villa

Michiyuki: Traveling and Beyond

Being under water blurs the self/space boundary because you are always in motion. Michiyuki, the Japanese spatial concept for “moving self,” means traveling from once place to another. It specifically refers to the space you covered and the time you spent while traveling.

But by translating Michiyuki to “traveling,” something is missing. Michiyuki is related to the idea of Yugen. If Yugen is the idea of hiding something, Michiyuki is looking at the same thing from another other side. This idea is further explained in the video above.

The Katsura Imperial Villa, built in the early 17th century, gained many additions over the years. It is constantly changing. Michiyuki is present beginning with the villa’s entrance. If you begin at the central gate, which is an open boundary in motion, the space is made to slow you down. Pictured below, it requires a lot of attention from the visitor.

The elements on either side of the path are different. On the left there are plants, and on the right bamboo. The finish on the ground also changes. You may be standing on sand sandwiched by moss, but you are about to move onto ground paved by stones. Although you can see the building behind the gate, you cannot see the actual entrance because the path is at an angle. Paying attention to these changing elements requires slower movements.

While we may think about moving through a space, we do not think about how a space could move us. Exploring a sense of a “moving self” can help create mindfulness within a space. Think about places where you’ve experienced Michiyuki. Can you think of a way you could look at it differently? (Originally published on http://www.PEDarch.com in January 2020)

This article is based on Yoko Kawai’s talk, “Designing Mindfulness: Spatial Concepts in Traditional Japanese Architecture,” at the Japan Society in New York in May, 2018.